Being involved in any type of accident can be stressful and traumatic, but truck accidents tend to be particularly damaging. Truck accidents occur for a wide variety of reasons, and the severity of these accidents vary considerably. Keep reading to learn about the statistics of truck accidents.

According to the Motor Carrier Management Information System (MCMIS) maintained by the Federal Motor Carrier Safety Administration (FMCSA), large trucks are defined as vehicles designed, used, or maintained mainly for transporting property. In addition, large trucks have a GVWR or gross combination weight rating (GCWR) of over 10,000 pounds. The MCMIS definition also includes any vehicle that carries hazardous substances that mandates placarding, no matter the weight.

These accidents include police-reported crashes that involve a vehicle traveling on a roadway in which at least one person loses their life within 30 days of the wreck. The person doesn’t have to die at the scene of the accident and these types of accidents are inclusive of any people involved, including non-motorists such as pedestrians and bicyclists.

According to the FMCSA, during 2017, the most recent year with data available, there were a total of 34,247 fatal accidents in the United States. Of that number, 4,455 involved at least one large truck or bus. That means these accidents made up 13% of the nation’s crashes.

These accidents include police-reported crashes that involve a vehicle traveling on a roadway in which no one lost their life but at least one person was reported to have one of the following:

These accidents include police-reported crashes that involve a vehicle traveling on a roadway in which no parties involved in the wreck endured any injuries.

A nonmotorist is anyone who isn’t an occupant of a vehicle, including, but not limited to the following:

In 2017, there were a total of 471 nonmotorist fatalities as a result of truck accidents, which made up about 9.9% of all vehicular fatalities. Of those deaths, 372 people were pedestrians, 76 people were pedalcyclists, and 23 died of either other or unknown causes.

These accidents include police-reported crashes that involve the release of hazardous materials onto the roadway. 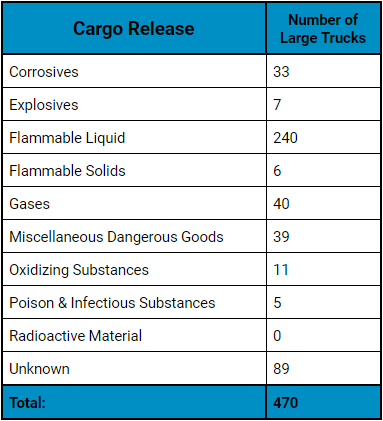 During 2017, there were a total of 119,716 million vehicle miles traveled (VMT) by large trucks in North Carolina. Of those millions of miles traveled, there were 172 fatalities due to trucking accidents, which means people died as a result of these accidents at a rate of 0.14% in the state.

If you’ve been involved in an accident with a large truck, our attorneys here at Benoit Law Firm, PLLC may be able to help. Our team is highly skilled in the area of truck accident personal injury law and we have helped many other people just like you obtain the justice they deserved. Let us see if we can help you, too. Don’t hesitate to reach out right away with any questions you may have.

Call the Charlotte lawyers at Benoit Law Firm, PLLC today at (877) 909-4088 to speak with an attorney about your personal injury case.